skip to main | skip to sidebar

I've never claimed to be the most tech-saavy person, but after struggling all morning to link a PDF of my pattern for an adorable Creeper hat that I made to my Ravelry (my first design!), I almost feel like just eating the yarn. Instead of that unfortunate outcome, I am going to see if I can just put it in here and be done with the computer frustration for a bit so that I can get back to the tea, fire and knitting that is waiting cheerfully for me. I hope, so hope, this works!

Place marker and join in the round (I used the magic loop method because of ease during decreases for the stocking)
Work K2P2 rib for 4 rows, or until the rib border is 1" from cast on
Change to larger needles for the remainder of the hat
Knit for 2 rows
On the second row place markers after stitch 34 and after stitch 56. The creeper face is worked opposite the join between the markers (22 stitches should be between the markers opposite the join)
Work the creeper face pattern in "round" intarsia (I had to look up how to do this, and am still working on getting consistent results with the "seam" area at the join when switching directions in the round. I recommend looking this up if you haven't done it before )
The face pattern is worked in 24 rows, MC is the background CC is the face. Work the pattern next (written here in text until I can upload a PDF)


knit 6 rows MC
Next row K2tog all stitches, until 1 remains, knit
Final row, K2tog all stitches, cut yarn, thread through remaining stitches and close tightly
Make a large PomPom in either color (or both), and attach to the end of the cap
Weave in ends

I'm working on a PDF attachment of the pattern for the face, but since PDFs are giving me such trouble right now, I thought I'd write a text version in the meantime.


I will update Ravelry as soon as I wrestle my computer beast into shape. If you don't hear from me, I am probably covered in wires and computer parts, eating yarn. I hope you enjoy this one, I loved the results, and a hat that my 5 year old is THRILLED to wear. Let me know if you have any questions, or if you notice any mistakes... Thanks!
-Krista 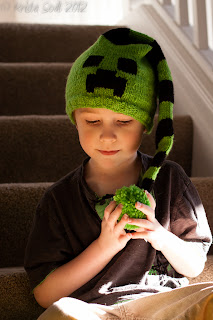 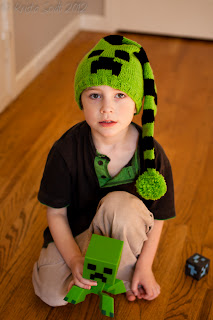 My son is going to love it! oh, and by the way where did you get the creeper figure and minecraft block? :o)

Thank you so much for this awese pattern. I was wondering what weight of yarn you used and what the gauge is for this pattern. Thanks again!

Thanks for all these comments! I must admit that I haven't checked this blog in a long time, and today I noticed that I had 5,000 pageviews. Whaaaaaat? Okay. The creeper toy in the photo came from Think Geek, http://www.thinkgeek.com/product/f050/?itm=adwords_labelsGeek_Toys_and_adwords_labelsOn_Sale&rkgid=1132042983&cpg=ogty1&source=google_toys&device=c&network=g&matchtype=&gclid=COjf77Glu7wCFU5efgodpyQAPA

I will post a hat size adjustment for larger children and adults later tonight. Also, I'm not totally sure that I counted the rows correctly for the sleeper stripes. I just went until it looked good to me, not so precise I know.
A tip- Go crazy on the pom pom. Make it as huge and lush as you can. It just makes this hat so much fun!
Thanks all!

Searching for Minecraft cake ideas, and I stumbled upon this cute Creeper hat mentioned on burntapple.com . It's so cute! Thanks for sharing your pattern notes.

I'm most of a viewing learner, would you be so kind in posting a step by step and from start to finish a video for this beautiful hat. I would really love to make it for my son, so it will be a handmade precious gift to him.

I'm a beginner knitter and wish I knew where to start with this but it makes no sense to me :/

what size needles do you use? Do you have for adults? Thank You So Much!

Did I miss you stating the size of the needles? Help!

Would there be anyway that this pattern could be adapted so it can be done on 2 needles instead of rounds. I haven't mastered knitting in rounds.

Books on the Nightstand